In 1137, the 15th year of Tianhui, Jin Xizong issued an edict to change the lunar calendar next year (1138) to the first year of Tianjun. This year lasted until the first month of 1141 (February 21 of the Gregorian calendar), the "Xie Tai Temple" of jinxizong. Amnesty. Reform the imperial system. "（《 The history of Jin emperor Xizong minted and issued Tianjun coins during the Tianjun period. 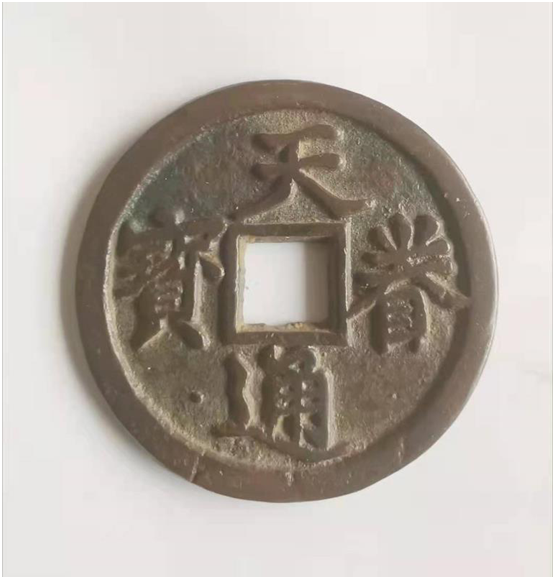 Tianxun Tongbao was coined during the reign of emperor Xizong of Jin Dynasty (1138-1140). As for Tianjun money, although the historical records do not contain its history of casting money, the material object has already proved that the money is not empty. In view of the late discovery of Tianjun coin in the past for a long time, it was found in Henan Province in its early years that a regular script Tianjun Tongbao coin (both the front and rear discoverers read it in rotation), which was once looked at by the spring community and then included in the grand treasure of the outline of ancient Chinese coins. It was honored with a great reputation.

At present, there are only a few known tianhun coins, including Xiaoping seal script of "tianhun Yuanbao", "tianhun Tongbao" into two authentic books, "tianhun chongbao" into three authentic books, etc. among them, two tianhun Yuanbao are isolated from tianhun chongbao, and there is no auction record. According to the introduction of Huaxia ancient spring, there are only three "Tianxun Tongbao" known. One of the "Tianxun Tongbao" folded two real books was photographed in the special session of ancient money for the 20th anniversary of China Jiade's spring auction in 2013. This piece has exquisite foundry, warm copper color, standardized shape, mature pulp, clean and neat mouth, and was traded for 2.415 million yuan.

As a great treasure of ancient coins, the whole process of Tianjun coin casting has been a mystery, and it has been difficult for the ancient spring world to make a final conclusion. Most people have different opinions. However, many scholars, after studying the calligraphy style, shape and style, casting technology, unearthed area and social and historical background of Qian Wen, found that it was in line with the third-class currency system of "son and mother Xiang Quan", and believed that Tianjun money was probably cast by Jin Xizong during the Sinicization reform in Tianjun years.

Tianxun money, as a set of money, has the attribute of trial casting. It can be seen that due to the reform of the Han system, Jin Xizong intended to open new coins, and also had the conditions for coinage. However, due to various reasons, the coinage plan could not be carried out, and there were no records of coinage in historical materials and documents. Therefore, Tianjun money was also designated as a great treasure of ancient coins. In China, the description of Jin Chaotian's family money was first seen in the 1992 work "appreciation of coins" by modern Quanjia Mr. Sun Zhonghui, with a front view with pencil. Nowadays, with the passage of time, Tianjun money has gradually come into the vision of more and more people and become a hot spot for people to appreciate and study.