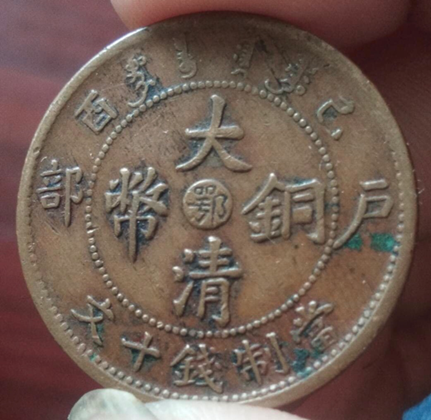 At the beginning of the Qing Dynasty, the Qing government did not make strict regulations on the decorative patterns of the ten bronze balls. Therefore, although the copper coins produced by provincial bureaus all adopt dragon pattern on the back, the Dragon types are different and various. It is easy to distinguish the ten copper coins when they are collected according to the name of the province, the year number and the material. However, it is relatively difficult to distinguish them according to the Dragon map. In recent years, the "Qing Dynasty copper coin" once became the favorite of the collection industry, and it was widely hyped in the media, with a high price of millions. It is understood that the collection value of "Daqing copper coins" in Xiangbo is extremely high, but the number of "Daqing copper coins" in the world is extremely rare, and most of the antiques on the market are forgeries. Nowadays, the price of "Qing Dynasty copper coins" has been soaring all the way, leading to the increasingly fierce forgery. The character "e" is ten characters. The bronze coin of Qing Dynasty has a single crown dragon and a horizontal line of "Da". The inscription "Da Qing copper coin" is cast in the front circle of the collection. The four characters of "Hubu youyou" in regular script are cast on the upper ring of the bead circle. The value of the coin is "Dangqian ten Wen". On the back of the collection, the inner ring is cast with the dragon flying totem, the dragon pattern is domineering and side leaking, which is full of heroic spirit and has the style of emperor; the outer ring is cast with the inscription "made in Xuantong year" with English words, which reflects the social state at that time. After years of baptism, coins wrapped into the bone, and the formation of exquisite chocolate paste, beautiful appearance, less scratches and bumps, deep typing mouth, less wear and tear edge teeth, clear dragon pattern. It is a rare and exquisite ancient coin.

The E-type version of the copper coin of the Qing Dynasty should have ten characters for making money. On the front side of the coin, there are four characters of "Da Qing copper coin", with a small character "e" in the center. The outer and lower edge of the bead circle is engraved with the value of "ten pieces of money making". On the left and right sides of the coin are the year of "Jiyou" and "Hubu" in the middle. The font is dignified and beautiful. On the back, there is a picture of a dragon and the inscription "made in Xuantong year". The dragon's pattern is still the same as that made by knife carving. The casting technology is marvelous. The dragon's tattoo is exquisite and majestic against the sea of clouds. The coin is rich and natural, with elegant layout design, exquisite carving, exquisite workmanship and strong artistic appreciation. It is a fine modern coin and worth collecting.

The collection is now on display on the platform of the antique shop. According to the treasure holder, the ancient coin was handed down from the ancestors. It has been appraised by experts and teachers and is a peerless masterpiece. After learning that it has this rare treasure, our company specially invited it to take part in this ancient coin. Now the holder of the treasure has difficulty in cash flow. I am willing to entrust this ancient coin to our company to search for a buyer through internet media. If you are interested in this collection, you can call the business contact number: 400 686 3616 for negotiation.